There’s no doubt that UC-Berkeley Haas Dean Rich Lyons is leaving a lasting legacy on the business school he has led for the past 11 years. When he departs the job next June, he will have overseen an overhaul of the MBA curriculum, crafted a set of guiding principles for the school’s culture, launched Berkeley’s own Executive MBA program as well as a novel joint undergrad program with the university’s engineering school, and raised more than $350 million for Haas, reeling in eight of the school’s ten largest gifts in its history.

As if that is not enough, however, Lyons will leaving with a physical reminder of his legacy: The $60 million Connie & Kevin Chou Hall, a new six-story structure that is entirely devoted to Haas students. There’s not a single faculty or staff office in the 80,000-square-foot building, but rather 850 new classroom seats in eight tiered classrooms and four flat flexible classrooms. There are 28 student meeting rooms, a top floor convening space capable of hosting 300 people, and finally a cafe with an outdoor terrace that will soon serve sustainable, locally sourced food (this is Northern California, after all).

“The nature of work has changed and this building reflects how collaborative work has become,” says Lyons. “We didn’t have nearly enough breakout rooms or flexible classroom space. Now the honeycomb work places facing the courtyard are places where you can see people at work day and night. I know people talk about a building arm’s race among business schools, but we have grown a lot and we needed space that would allow us to catch up. 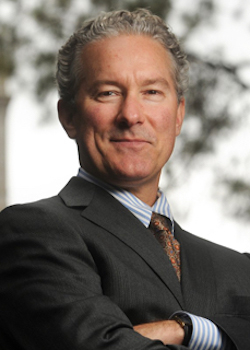 The building, moreover, is a badly needed addition for Haas to lessen crowding and achieve its growth plans. The school’s full-time MBA program enrolled a record incoming class of 284 students this year, up from 250 a year earlier. Next fall, the school is aiming to increase its intake to 300 students. “We’ve been below the minimally efficient scale for a full-time MBA program,” says Lyons. “We’ll ultimately be in the 300 to 350 range, with 350 being steady state. For years and years, we couldn’t expand behind cohorts of 60 students. Now we can expand to 75 seats in a cohort so going to 300 will be easy.”

Lyons also expects to build on the successful launch of the new joint business and engineering undergraduate program which attracted some 2,500 applicants for just 40 spots. Next on tap is a similar undergraduate joint degree offering in business and life sciences. So the new building, opened this fall for student use but not yet entirely complete, will allow for future growth for some years to come.

And as with any new campus building, the facts and details are awe-inspiring. There’s the 24,300 square feet of exterior windows, the 17,000 square feet of writeable surfaces, from whiteboards to paint and glass, the built-in microphones on the tiered classroom desks that are voice activated, along with the video cameras that automatically focus on students getting air time in a classroom, all of it to allow live streaming and recording. Audio and videoconferencing, therefore,is available in every classroom so remote speakers can be beamed into a class or remote students can be brought into a course. The wooden deck with teak railings at the top of the building affords visitors expansive views of San Francisco Bay and the changing skyline of the city by the bay. ON TRACK TO BECOME THE GREENEST ACADEMIC BUILDING EVER

Chou Hall is, in the words of Dean Lyons, “on track to be the greenest academic building in the country.” It is the first academic building designed for LEED Platinum certification and the WELL Building Standard, which advances human health and wellness. The school expects to use the building with zero waste, a 38% improvement in energy efficiency and a 40% reduction in water use. In fact, 10% of all the building materials were from recycled content.

More than a single building, the fourth in the Haas mini-campus at the University of Berkeley, however, the new structure sets off a larger and more inviting courtyard for students. Haas broke into the existing library, creating an opening to the outdoor space. “We are in California, afterall, so all year round students can hang out in the outdoor courtyard,” says Lyons, giving a tour of the new campus yesterday (Sept. 18). It’s now a town hall kind of place. We were trying to redo the entire footprint of the campus.”

So that Lyons’ cultural initiative remains embedded long after he leaves, the school’s four defining principles are etched in stone on the floor of the courtyard: To question the status quo, to show confidence without attitude, to always be a student, and to have ambition beyond oneself. Lyons gleefully jokes that if a new dean wants to change direction, he or she would have to dig up and remove the principles enshrined in the courtyard.